Chakra is the Sanskrit word for 'wheel', and in ancient Eastern traditions it's the word used to describe swirling energetic hotspots all over the body. There are thousands of chakras from the tips of your fingers to the bottoms of your toes. However, there are Seven Major Chakras that run from the base of your spine to the crown of your head. These seven chakras are what are commonly referred to when people talk about the body's energy centers.

Energy flows into and out of each chakra center which then energizes the body's meridians (or energetic blood stream). In addition to fueling the meridians, chakras directly provide the body's organ systems, tissues, muscles, and cells with energy to flourish. Because physical and emotional toxins can clog the chakras, sometimes energy becomes blocked or stagnant and the organ systems the chakras feeds becomes deficient. Keeping your chakras healthy and clean is important in ensuring optimal physical health for your body.

The seven major chakras not only fuel the physical body with energy, they energize the emotional body as well. Each chakra is responsible for different emotions, feelings and perceptions correlating with aspects of your life. In fact, often times it's the emotional portion of our being that controls the physical outcome. What this means is that often it's an emotion, or an emotional tie to a situation in our lives that leaves our chakras depleted of energy. Negative emotions are responsible for many of the toxic clogs that result in our chakras being partially blocked. Because of this, many physical ailments or physical dis-ease is a direct result of years of emotional turmoil.

The good news is there are ways to clear our unwanted subconscious beliefs, conscious beliefs and the chakra centers. There are many techniques used by energy medicine practitioners to heal and restore balance to the chakras, as well as unravel negative programs being held in the brain and body resulting in emotional and physical dis-ease.

Article Source/About the Author: Kirsten Nagy is the Co-Owner of Prana Energetics, a Denver, CO based holistic healing center.

Back to: Ascension Articles
Chakra Vibrational Healing - It's All in The Mind

Symptoms Without a Diagnosis - The New Language of Energy

Learn how to balance and activate your chakras, the energy centers of the body, in natural ways using sound healing, color therapy, yoga, specific foods, and much more. Bring about changes in your life and discover how the chakras work and how you can improve your mind and body health by working with the chakra centers. 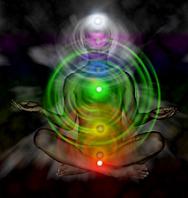 Chakra Healing, Vibrational Healing - It's All in The Mind

“What we find so hard to believe is that there is the potential within each of us to work more in harmony with our body, mind and spirit. That we are made up of energy and can focus that energy as we choose. This can even be done without the need to dissociate from daily modern life, meditate for hours or join any mystical society..!” [Read More...]

Healing into Light - The Purification of Individuals and of the Earth

“The power of light that is now more available on the planet is already infusing our physical, mental, and emotional bodies. Through understanding the process and through working with it in a conscious way – in a way that focuses on the incorporation of greater light into the body and consciousness - greater healing of pain and suffering that relate to the time we are in can take place, and discomfort and distress can be alleviated... ” [Read More...]

Symptoms Without a Diagnosis

"Many people today are experiencing unanticipated bodily symptoms that seem to appear out of nowhere and have no real medical diagnosis. Others are aware of sudden emotional surges that also appear out of thin air, are intense, repetitive, yet difficult to connect to specific events or circumstances. Often, in the presence of such conditions, we look for logical explanations, yet find every explanation insufficient or lacking..." The New Language of Energy

Chakra Healing - How to Balance Your Chakras

“If a chakra is closed, it may show in you holding back in that area and not feeling comfortable about it. For instance if your heart chakra needs healing, you may not allow yourself to feel or receive love from others. By performing chakra healing meditation it can help you regain that balance so that you are not holding back any of your characteristics...” [Read More...]